Major Issues with DAOs | The Cons of DAOs 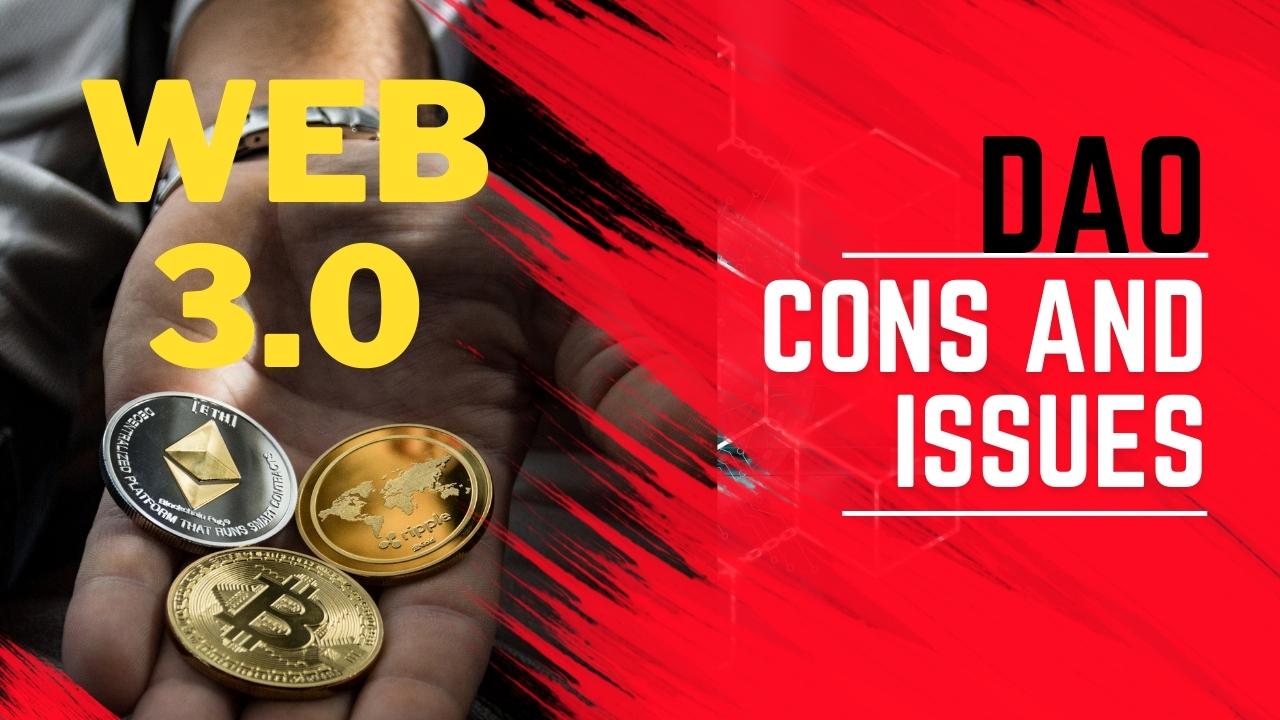 DAOs, the decentralized autonomous organizations have gained a lot of transactions within the last two years. DAOs are one of the basic building blocks of Web 3.0. DAOs are defined by Forbes as an internet community with a shared bank account. However, DAOs are not without their inherent issues.

DAOs promise to create decentralized organizations where decisions will be made on majority voting. Profits will be shared according to the relative investments in the most transparent way. No one entity or a selective few will be able to enforce their decisions on complete organization.

DAOs promise to not only just redefine finance as we know it, but also how we are going to build major corporations in the real world. NGOs and communities are adopting DAOs as their main business model. Mark Cuban, a billionaire entrepreneur has also predicted that in the future all corporations will eventually become DAOs

However, there are still some issues with DAOs that are going to be a hindrance in the open acceptance of DAOs operation mechanisms.

Cons of DAOs | The Ugly truth of DAOs

Not, everything related to blockchains or DAOs is good. Now, Let’s see some of the major real world issues that are being faced by DAOs.

1.    DAO Decision-Making Process is not perfect

However, if we see the reality of life, the majority is not always right. Usually, there is always a person in an organization with a major influence that results in the success of an organization. Apple was dependent on Steve jobs. Facebook was created by Mark Zuckerberg. The majority may not always be willing to take necessary risks for a business or to try something new. Just imagine an organization of 10,000 employees with decision power with everyone. They may decide to raise their pays which may result in the collapse of an organization. So, the majority decision-making of DAOs may not be perfect in the true sense.

Most of the DAOs operate on a one token, one vote basis. But there are some inherent risks with the scheme.

DAOs promise to change overall organizational structures. However, the legality of DAOs is still a big question mark. There is no definite legal jurisdiction with DAOs. The questions regarding the law, tax, regulatory authorities are still unanswered. Existing laws of business, securities, and liabilities do not fit for DAOs.

DAOs have been officially recognized and given legal status in Wyoming. This is a big step forward for the official recognition of DAOs.

But owing to major attacks and hacks on DAOs and some of the DAOs emerging as only Ponzi schemes. Questions are being raised who is to blame if anything goes south with a DAO. What if DAO votes to invest in an illegal project. Who to sue in case DAO does something wrong?
Moreover, the legality of cryptocurrencies is already being questioned in many countries. Some countries have even banned cryptocurrencies. There is still confusion regarding DAOs and their legal status.

The truth is, many of the DAOs out there are in fact scams, and these organizations have become the newest way to lure eager investors and then manipulate them to lose huge sums in the name of investment in some fake projects. Therefore, it is very essential that you research enough to determine that the DAO you are investing in is not a scam or a Ponzi scheme. Always look for transparency. The more info that is available for a DAO including whitepapers and credible developers, the more legitimate a DAO would be in general.

The code behind the DAOs is always kept open. Anyone can view the code and members can propose the changes to the underlying protocol. But the same openness leads to hacks.

What is the difference between Bitcoin and DAOs?

DAOs operate on voting. Members can vote to change underlying protocol or suggest changes. Although Bitcoin is decentralized, no changes can now be made to the protocol.

Are DAOs recognized in the real world?

The state of Wyoming has officially started recognizing DAOs. However, they are still not recognized in other parts of the world.

Are DAOs only Ponzi schemes?

Not, all DAOs are Ponzi schemes. There are big names in the crypto world that have established themselves as promising DAOs like Decentraland and Maker DAO.

Can DAOs be hacked?

Yes, the DAO code is open source and can be viewed by anyone. Hackers may find any vulnerability in the underlying protocol and hack the DAO. Similarly, there have been incidents where attackers were able to get hold of majority governance tokens and therefore were able to influence the financial decisions.

Disclaimer
The Post is only the views of the author and should not be taken as legal or financial advice.

Want to Write for us email us contact@cavementech.com